John Brennan’s experience with U.S. Army helicopters began with a twelve-month tour in the Mekong Delta region of Vietnam assigned to the Army’s 114th Assault Helicopter Company as a Flight Operations Coordinator. After Vietnam, he earned a B.A. degree in American Studies from California State University at Chico and upon graduation worked for the Smithsonian’s National Air and Space Museum Library. Later, when the 114th AHC formed an Association, he served as the unit’s historian. Today, he is happily retired after thirty-one years of federal service and resides with his family in Northern California. 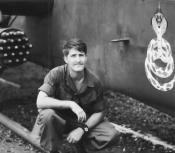