Gary Wayne Foster has written numerous professional articles for engineering publications. A comprehensive account of his experiences in India has been translated into the Bengali language and published internationally. He is a frequent contributor to Red Clay magazine, the official publication of the Khe Sanh Veterans Association. His professional assignments have taken him to many countries including India, Vietnam, Bosnia, Jamaica, Cambodia, China, Bolivia, El Salvador, Afghanistan, Kazakhstan, Liberia and Congo, as well as other parts of Africa, and Iraq. He holds a BS degree in Civil Engineering from the University of California at Davis, an MS degree from the University of Alaska and an MBA from The George Washington University. He is a registered professional engineer in Idaho, California and the District of Columbia. In addition to his years living in India, he has also lived in New Zealand, Australia, Zaire (Democratic Republic of Congo) and France. A native of Oklahoma, raised in North Carolina, Arizona and California, he currently serves as Vice President with Stanley Consultants headquartered in Muscatine, Iowa. 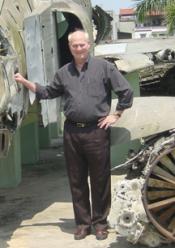