Former United States Air Force Captain Dr. Larry Elton Fletcher flew 177 combat missions as a pilot in AC-119 Shadow gunships during his tour of duty in Vietnam with the 17th Special Operations Squadron Forward Operating Location “Fighting C Flight” at Tan Son Nhut Air Base, Saigon, Republic of Vietnam, from May 1970 to May 1971. He was awarded the Distinguished Flying Cross with Oak Leaf Cluster and the Air Medal with eight clusters for missions flown in Southeast Asia. Fletcher was nominated for Pacific Air Forces Outstanding Junior Officer of the Year.

After five years of active military service from 1968 to 1973, Fletcher returned to the teaching profession and public school administration, and earned a Doctor of Education degree from the University of Missouri, Columbia. He retired from public education in 1997 to pursue a writing career. His first novel, Shadows of Saigon: Air Commandos in Southeast Asia, was published in 2001 and its sequel, The Shadow Spirit: Flying Stingers & BUFFs in SEA, was published in 2004. As history book project coordinator, Larry spearheaded the AC-119 Gunships History Book 1968-1973 for the AC-119 Gunship Association, which was published by the Association in 2009. Larry and his wife Sue reside at Lake of the Ozarks, Missouri.
http://www.shadowgunships.com/soon.html 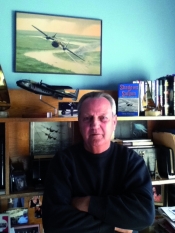