In September of 1993, at the age of thirty-three, Angela Madsen underwent back surgery for an injury she sustained while on duty in the military. Her goal was to be walking and surfi ng within one year but the surgery went very badly and many mistakes were made, leaving her with an unrepairable spinal cord. But Angela is not defined by the word “disabled.”
Angela is a mother of one, grandmother of three, from Long Beach, California, who loves to surf. She is a veteran of the United States Marine Corps and a life member of both the Disabled American Veterans and the Paralyzed Veterans of America. Angela also enjoys working with newly injured vets to get them involved with adaptive sports. In February of 2003, the Amateur Athletic Foundation named Angela as a recipient of the Women Who Inspire Us Award; in September of 2003, she received the Leo Reilly, Jr. Award for outstanding spirit and determination, and also received the 2011 California Paralyzed Veterans Association Legacy of Hope American Spirit Award.
On February 7, 2007, she became the first paraplegic woman to row across the Atlantic Ocean. Her rowing partner, Franck Festor, an amputee from France, did not speak English and Angela does not speak French. They rowed nearly 3,000 miles in sixty-six days, coming in eighth place in the pair’s class. There were twenty-two boats in the race and they were the only physically challenged athletes. Angela competed on the U.S. Rowing Team from 1999 thru 2008 and competed in the 2008 Paralympics in Beijing, China. She is a four-time World Championship Gold Medalist and a Level 3 Rowing Coach. She is the Founder, Director and Coach/Instructor of the California Adaptive Rowing Program (www.carplb.net) a non-profit program founded in 2000 that teaches disabled people to row. She also assists in the start up of new adaptive rowing programs nationwide.

In 2009, Angela rowed across the Indian Ocean from Geraldton, West Australia,3,600 miles to Mauritius, an island east of Madagascar, with a crew of eight on a fifty-eight day adventure that set many world rowing records, including the fastest rowing crossing of the Indian Ocean. She is now one of the first women and the first and only person with a disability to row across the Indian Ocean, as well as the first disabled woman to row across two oceans.
In 2010, Angela was part of another world record setting rowing crew of four women. They became the first and fastest women’s crew to circumnavigate Great Britain, and Angela has become the first and only person with a disability to have rowed the 2,010 miles non-stop and unsupported from London’s Tower Bridge, around Great Britain and back to the Tower Bridge in fifty-one days.
In 2011, it was back to the Atlantic, only this time as skipper of a crew of sixteen on a boat called Big Blue, he first ocean rowing catamaran. Angela and her crew rowed from Tarfya, Morocco to Barbados in just forty-seven days. In 2012 Angela set a Paralympic record and won a Bronze medal in the women’s class 56 shot-put in London.

Future ambitions and plan include a second attempt at a record-setting 2,500 mile solo rowing crossing of the Pacific Ocean from California to Hawaii and the an appearance at the 2016 Paralympics in Rio de Janeiro.
Angela lives with her wife, Debra Moeller, in Long Beach, California and Bakersfield, California. 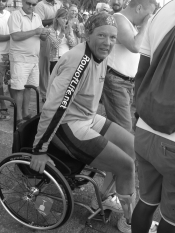