Mark B. Bagley was born and raised in Foxboro, Massachusetts. As a child, he dreamed of being a pilot and by age 15 owned his own plane. By the time World War II began, he already owned and operated a flying school in Woonsocket, Rhode Island. A full-time job instructing U.S. Navy personnel in the use and calibration of steam ship instrumentation resulted in a draft exemption from military duty, but his love of flying drove him to convince his draft board to declassify him so he could join the Army. His natural talent and experience quickly moved him from glider test pilot to instructor, then Flight Officer. After the war, Mr. Bagley had an illustrious career in Control Systems Engineering, working with Bechtel Corporation, NASA and others. He passed away in 2006, at the age of 88. 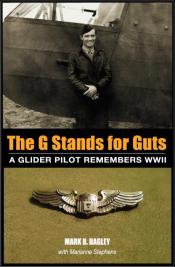