Scott Harrington is a graduate of Southern Illinois University, Class of 1962. He received his commission as a 2nd Lieutenant in the United States Air Force in December 1962, and attended Weapons Controller School at Keesler Air Force Base, Mississippi. He spent nearly two years as a Weapons Controller in the SAGE System at Sioux City Air Base, Iowa, before being sent overseas to Clark Air Base in the Philippines. In 1965, after spending a brief tour at Tan Son Nhut Air Base in South Vietnam, he was assigned to Nakhon Phanom, Thailand (aka “Naked Fanny”), where he served four months as Senior Director/Weapons Controller of a radar operations crew in support of aircraft flying bombing missions over North Vietnam and helicopter rescue missions originating from Nakhon Phanom. He later assisted with the setup and initial operation of a radar site at Dong Ha, South Vietnam.

Upon his return to the United States he was assigned to Indian Springs Air Force Station, Nevada (now Creech Air Force Base), in support of the Atomic Energy Commission’s underground nuclear test facility at Mercury, Nevada. Harrington then spent eleven years in broadcasting, winning several awards for broadcast excellence as a radio news anchor.

He left the broadcast field in the late ’70s, and spent the next 26 years with Gulf Power Company in Pensacola, Florida in public relations. Now retired, Harrington and his wife, Jaci, live on 10 acres in Northwest Florida. 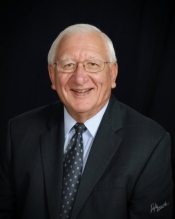