Sara Janet Shaw, known as Janet to family and friends, using Sara only in business situations, was conceived in China and believes that some of the Chinese spirit was infused into her blood system. She was born on February 23, 1922 in Brooklyn, NY. When she was five the family moved to Manhattan, a couple of years later to Ravinia, IL, and then to Highland Park, both suburbs of Chicago. She attended school at Highland Park Public School and a public school in Hollywood FL. Her brother David’s doctor had recommended that David spend some time in the warm climate to recover from pneumonia. When the family returned north Janet attended PS 93 in Manhattan. Later the family moved to Oceanside, Long Island, where Janet attended the public high school. Then the family moved to Long Beach, Long Island, where Janet graduated a Salutatorian of a class of ’63 from Long Beach Senior High School. She earned a BA (majoring in Education in Social Studies and English) from the New York State College for Teachers and later an MA in education from the University of Kansas in Lawrence.

Janet taught 7th grade for two years at Long Beach Junior High School, served as Secretary to the National Legislative representative of the Jewish War Veterans, was an Economist for Tent Repair Supplies at the office for the Quartermaster General, and Indexer of Department of Defense Top Secret Regulations. For her final period of professional employment Janet worked for more than twenty-five years at the Central Intelligence Agency. After retirement Janet did volunteer work including being a member of the CIA officers legal defense team.

In 1994 the Shaw’s moved to the Charlestown Retirement Community. Janet served on the Residents’ Council for seven and a half years and served as its president twice. She is a member of the Charlestown Board of Directors where she has served for thirteen years.

Janet grew up in a close-knit, loving family where she was the oldest of three children. Edith was her younger sister by two and a half years; David, her younger brother by seven years. 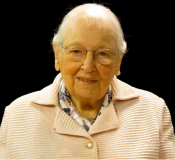