Sandra “Sandy” Kelton Pitts holds three degrees (BA, MA, Ph.D.) in language arts and history. She was a teacher for forty-five years, at every grade level from 1st through graduate school, finally retiring as an Associate Professor and head of the Master’s Program at Embry-Riddle Aeronautical University, Extension Division. Accompanying her Air Force fighter-pilot husband, Earl, her diverse classroom venues stretched from New York City and California to Morocco, Germany, Thailand, and Idaho—just to name a few.

She has written numerous articles in education and psychology journals with a focus on reading: learning processes, diagnoses, and remediation procedures.

Sandy is a member of Mensa as well as an accomplished actress having appeared in various theatrical productions in New York, New Mexico, Germany, and even off-Broadway.

This is her first book, which has taken her three years to write. She has won no literary awards and frankly doesn’t care, as long as those who read this book come to realize that Iran’s people have been unfairly demonized by political circumstance, as she and her husband believe.

Sandy and Earl currently live in Idaho, as do their three daughters, five grandchildren, and two great-grandchildren. One grandson is career Army and on his third tour in the Middle East. 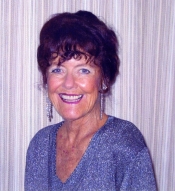