Richard C. Bachus has been a professional journalist, English teacher, and advertising copywriter for nearly three decades He’s had thousands of articles, essays, and marketing campaigns published around the world by media such as the Christian Science Monitor, Newsweek, Ski, the Detroit Free Press, Traverse, Pacific Builder & Engineer, Triathlete, and the Traverse City Record-Eagle.

As the descendant of four generations of U.S. soldiers, Mr. Bachus lives a peaceful life in the woods of Northern Michigan with his small family—living in a house not unlike “The Shack” depicted in the pages of this novel. Joe and Anna Becker are fictional versions of Mr. Bachus’s real grandparents, whose Great War experiences are chronicled on the U.S. WWI Centennial Commission’s blog. 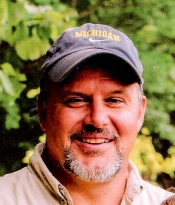