Guy Maynard lived in New Bedford, Massachusetts, for his first thirteen years, spent his high school years in Urbana, Illinois, went to two years of college back in Boston, and has lived in Oregon since the early 1970s. He was lead singer in a teen rock and roll band, was active in the civil rights and anti–Vietnam War movements, lived on a commune in southern Oregon, worked as a carpenter, and was a member of a worker-owned construction company.

After receiving his degree in journalism from the University of Oregon in 1984, he was editor of a small community newspaper and then worked on a number of trade magazines in such fields as liquid and gas chromatography and geographic information systems. He has been editor of Oregon Quarterly, the University of Oregon magazine, since 1995. His essays and articles have appeared in several Northwest regional publications. He was co-editor of the 2003 collection, Best Essays NW.

Guy lives with his wife Shelley in a 1930s-vintage house in the middle of Eugene, Oregon. They have a grown son, Corey. This is his first novel. 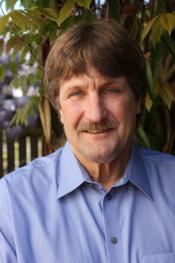