Edward Whitacre Paulus’s military career began in 1926 as a cadet at the University of Iowa. He was commissioned a first lieutenant in the Medical Corps of the Army Reserve in 1932. In 1936 he transferred to the Iowa National Guard.

In 1940 he was named commanding officer of Company G, 136th Medical Regiment with the rank of captain. He was a major in command of the Regiment’s 3rd Battalion when the National Guard was activated for World War II in 1941.

He went with the Guard to Camp Claiborne, Louisiana, in February 1941, then to Ft. Dix, New Jersey, in January 1942, and on to Northern Ireland where the Guard underwent intensive training for ten months.

He was made a lieutenant colonel in Northern Ireland and made commander of the 109th Medical Battalion. He commanded the battalion through four battle campaigns: Tunisia, Naples-Foggia, Rome-Arno, and North Apennines.

In 1944 he was appointed Division Surgeon of the 34th Division, a post he held until the end of the war. After the war, Colonel Paulus returned to his hometown of Iowa City, Iowa, where he practiced medicine until 1969. He stayed in the National Guard for several years, in charge of the 109th Medical Battalion’s Clearing Company. Dr. Paulus died in 1981. 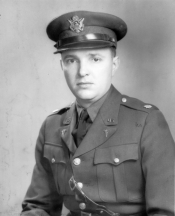