Charles S. McCandless graduated from Stanford and soon after joined the the Navy. He was stationed at Pearl Harbor, when on the morning of Dec. 7, 1941 he was rendered unconscious as a bomb exploded only a few feet away from him and his shipmate. He never saw his friend again. Soon, he was back on duty, piloting a dive bomber during the battle of Midway, which he crashed at Guadalcanal. No longer able to fly, he served as a Seabee on several islands in the Pacific, was a frogman at Iwo Jima, and struggled to get out of the Philippines after the Japanese surrendered in 1945. After the war he became a major developer of R&D office buildings in California’s Silicon Valley. 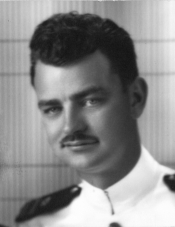