Michelle Zaremba was born in Brook Park and later moved to Valley City, Ohio, where she attended Buckeye Schools. She served in the Ohio Army National Guard from 1994 to 2006 as a Squad Leader in the 1486th Transportation Company. Michelle received a Bachelor of Arts in Applied Conflict Management from Kent State University and a Master of Public Administration from Wright State University. Since 1999, she has worked for the City of Dayton, Ohio, where she currently lives with Nick and their two children, Cole and Caleb. 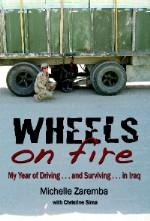