Donna E. Elliott, a retired military photojournalist, values the peaceful surroundings of the family farm in the Arkansas Ozarks foothills. In civilian life, she utilized her writing skills as a newspaper and radio news reporter, and freelanced as a human interest photojournalist. While in service, she earned the U.S. Army Command FORSCOM 4th Estate Award and three Fifth U.S. Army Minaret awards for “excellence in journalism.” Donna is a member of the Military Writers Society of America. 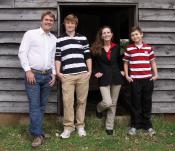