C.P. Tertius is a pseudonym for a former military officer, corporate executive and university professor who is a semi-professional musician, blue-water sailor and adventure traveler. He has attained both civilian and military graduate and post-graduate diplomas and has been published technically under an alias. His travels have taken him around the globe several times with major stints in Latin America, Europe and Asia. He has resided in South-East Asia for several years where he has witnessed the plight of stateless refugees of whom he writes. “Every Man Truly Lives Alone” is their story as much as it is his. 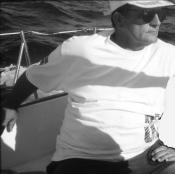