Bill Everett was selected for the leads in both the junior and senior plays, a first in his high school’s history. When he and his leading lady also won the New Mexico One-Act Play Contest, Bill was briefly tempted to try Hollywood, but enlisted in the U.S. Air Force instead. After a tour with Intelligence, he joined the U.S. Border Patrol, transferred into U.S. Customs and was drafted into the DEA. Bill Everett is a decorated agent and one of the first recipients of the DEA Purple Heart award. Today, Bill is doing well in retirement and enjoys his close relationship with his two daughters and their families. 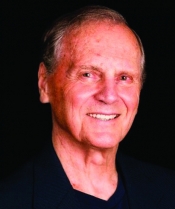